Our review of the

BMW’s flagship 8-Series Convertible – Is it the ultimate driving machine?

The new, BMW 8 Series Convertible is the natural successor to the original 6 Series. Now a large GT, the 6 Series has been repositioned, and this new range of 8 Series models takes over the mantle, as their flagship models. 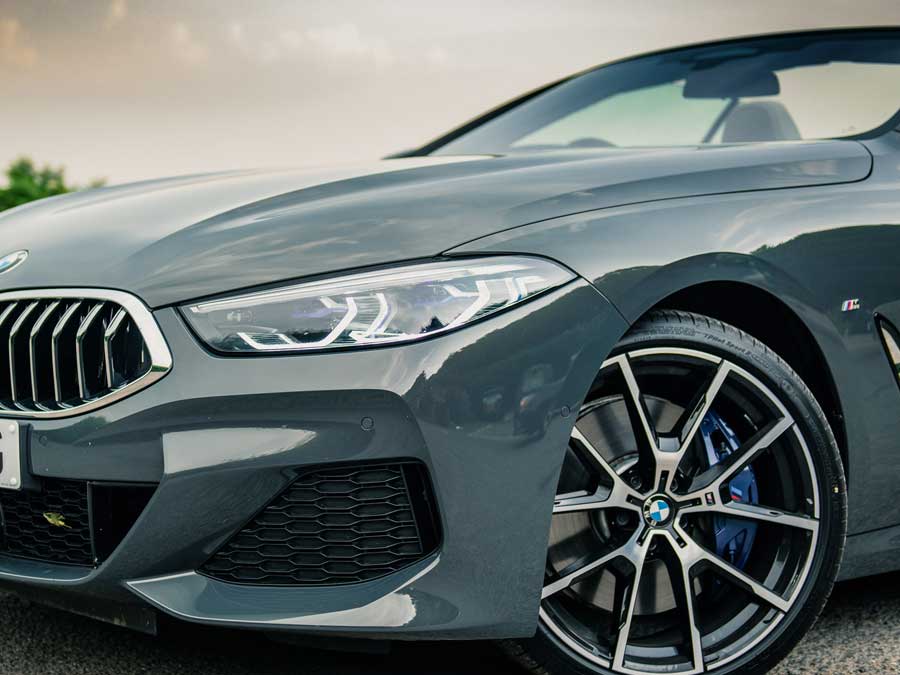 So this new range of BMW ‘Hero’ cars, the 8 Series has a significant brief to fill and is designed to blur the lines between a long-legged Grand Tourer and more focused sports cars. BMW hope you’ll find the 8 Series Convertible a comfy and sturdy vehicle, at home on both long drives and for evening blasts on quiet backroads. Undoubtedly those aspects are covered with a coupe – but the convertible is an even more excellent, exhilarating experience.

The new face of BMW

The new 8 Series Convertible is one of the first models in BMW’s line-up to enjoy the company’s new design direction. In essence, this means that there’s a large and imposing grille on the front of the car and a long way removed from the neat little kidney grille that a classic BMW enjoyed. Despite its large size, the grille is more for show than anything, with active trick shutters that close shut at high speeds to help air slip over the large bonnet, only opening at low speed when the engine needs an extra shot of air to keep fresh. 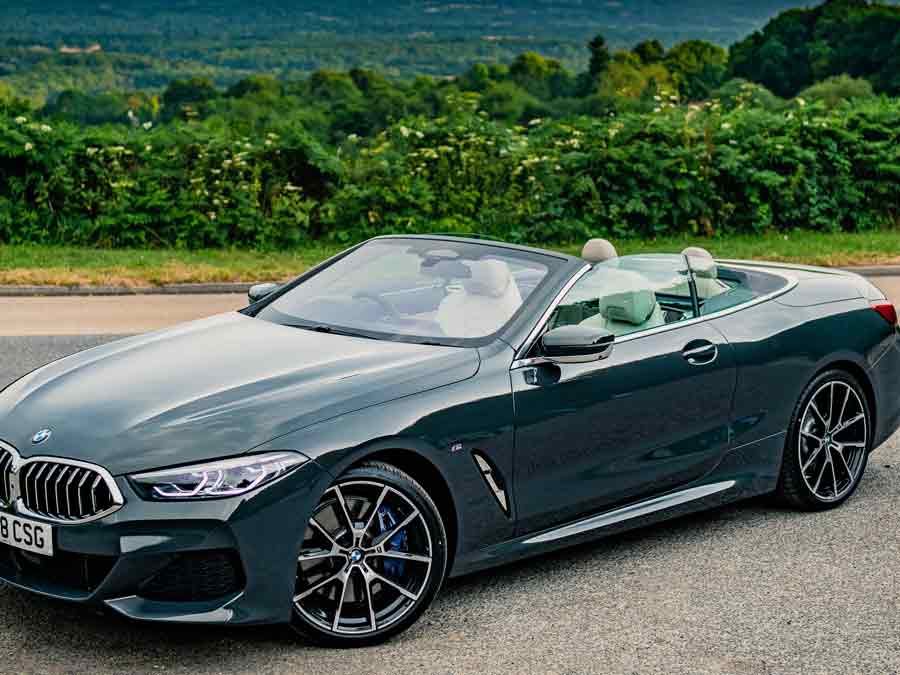 Gaze down the side, and the 8 Series has some nicely defined sculptural lines that are complemented by extensive and broad shoulders at the rear to give it real presence. Perhaps not as elegant as rivals from Porsche or Aston Martin, but it certainly strikes an imposing look.

Unlike many previous BMW, the 8 Series Convertible has a canvas roof as opposed to a folding hardtop, and we reckon it’s all the better for it, looking much neater to our eye. It’s also pretty quick, taking just 15 seconds to open at speeds at up to 31mph. It takes the same time to close as well, which can be pretty handy with the temperamental British weather.

Taking the roof off a car is always going to compromise the stiffness and rigidity of it, but BMW reckons that it’s only two per cent less stiff than the coupe model, with the chassis of the soft top using the same carbon core as its hardtop sibling. 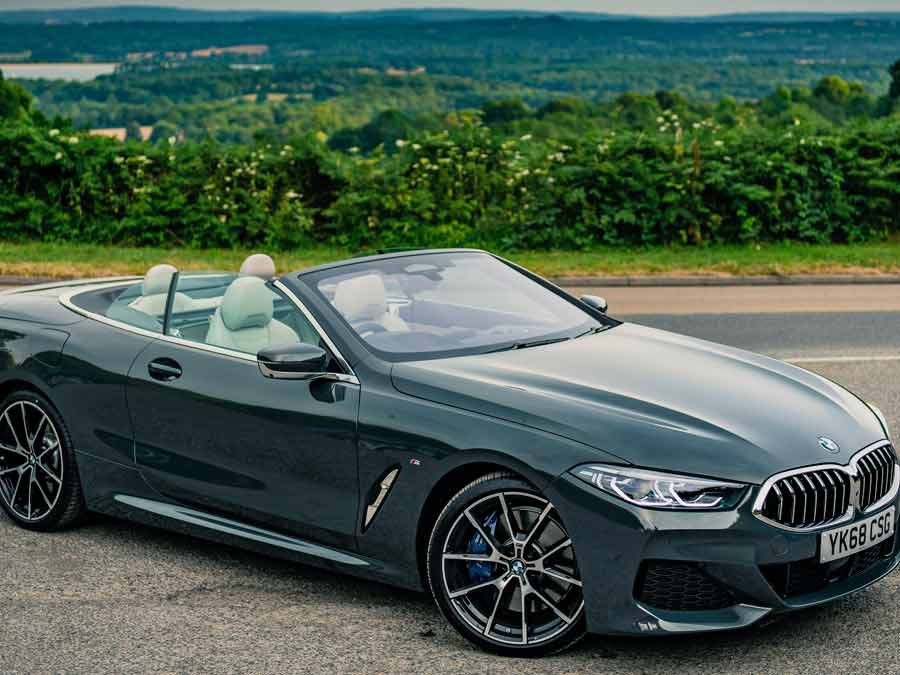 As we’ve just touched on, a coupe version of the 8 Series is also available. The coupe shares its styling that nicely tapers down towards the tail, and a double-bubble section is a nice touch too.

Luxury on the inside

Inside and BMW hasn’t held back. It’s an incredibly beautiful place to be, with the cabin a perfect blend of comfort and advanced driver technology. This tech includes BMW’s own Live Cockpit Professional, and it has a 10.25-inch main display and a 12.3-inch screen for the digital dials (a nice touch, these change appearance depending on what driving mode you’re in). 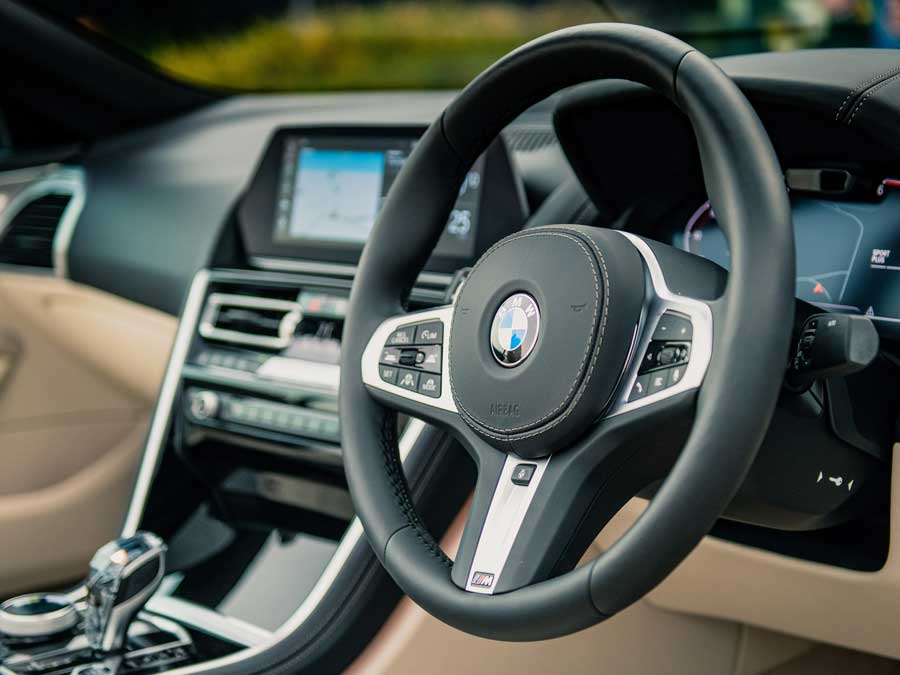 Standard models feature air scarves to warm your neck when you have the top down on those cold mornings, as well as electrically adjustable sports seats. There are also swish-looking mirror-ball rotary controls, while from the options list, you might take the likes of the optional crystal gear lever. 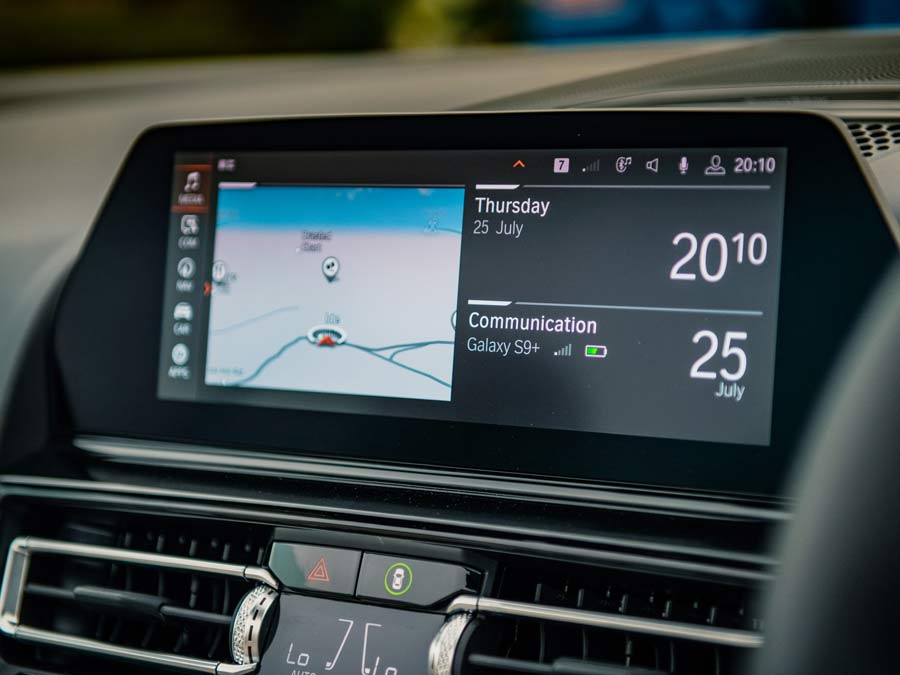 While the coupe’s sloping roof makes the back seats tight on headroom, it’s not an issue with the Convertible, but it’s only really suited to smaller occupants as the legroom is still pretty limited. There are ISOFIX attachments on the rear seats, so we managed to shoehorn in two child seats quite happily. Reality is that theses seats will often be used for extra luggage, though the boot itself is pretty big of a car of this size, with 350 litres of cargo capacity and it should happily swallow up a set of golf clubs (or in our case, a buggy).

A real GT on the road

Nestled under that large bonnet is the choice of two impressive power units. There’s the headline-grabbing 4.4-litre, twin-turbo V8 petrol that kicks out a serious 523bhp and is suitable for 0-62mph in a heady 3.7 seconds, or the slightly less glamorous straight-six diesel. Don’t discount this, however, as this 3.0-litre unit still kicks 320bhp and will whisk you to 62mph in an always swift 5.2 seconds. Don’t think it sounds like an old tractor either. It’s incredibly refined and smooth, with a real grunt to the exhaust note when you push on. 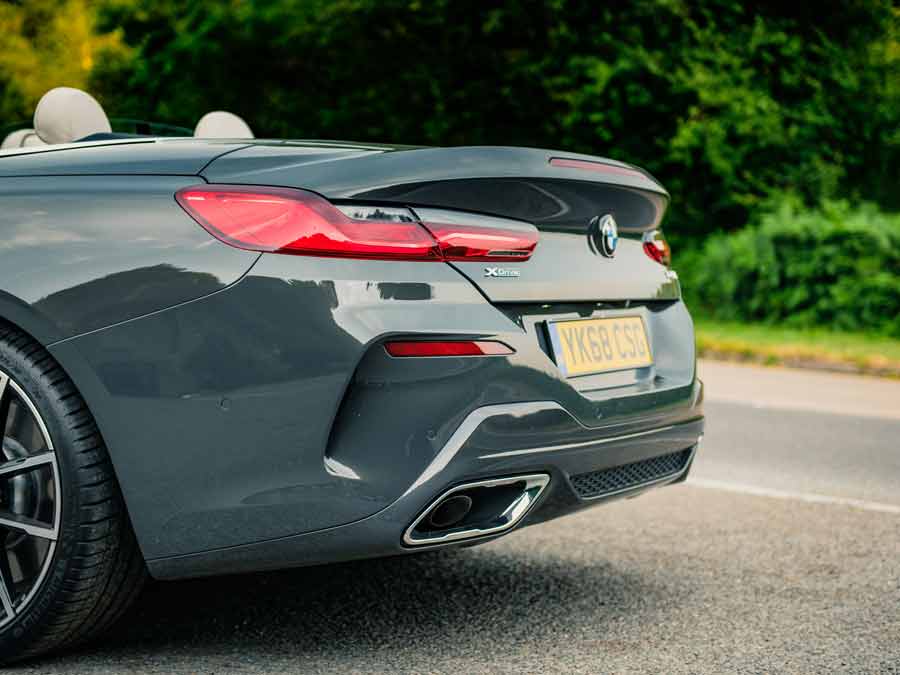 Tipping the scales at over two tonnes, it’s surprisingly agile when you start hurling it into corners too. In part, this is thanks to the smart four-wheel-steering system that the 8 Series comes with, helping you place the car precisely into bends. You always feel in control as well, with the xDrive four-wheel drive system providing plenty of ‘bite’ as it enters and exits corners at speed.

Billed as a sports car, and you can certainly have a lot of fun on an empty country road, the 8 series convertible is a true Gran Tourer. The effortless power from the engine and refined handling will see you cover the ground with ease and always with a smile on your face. 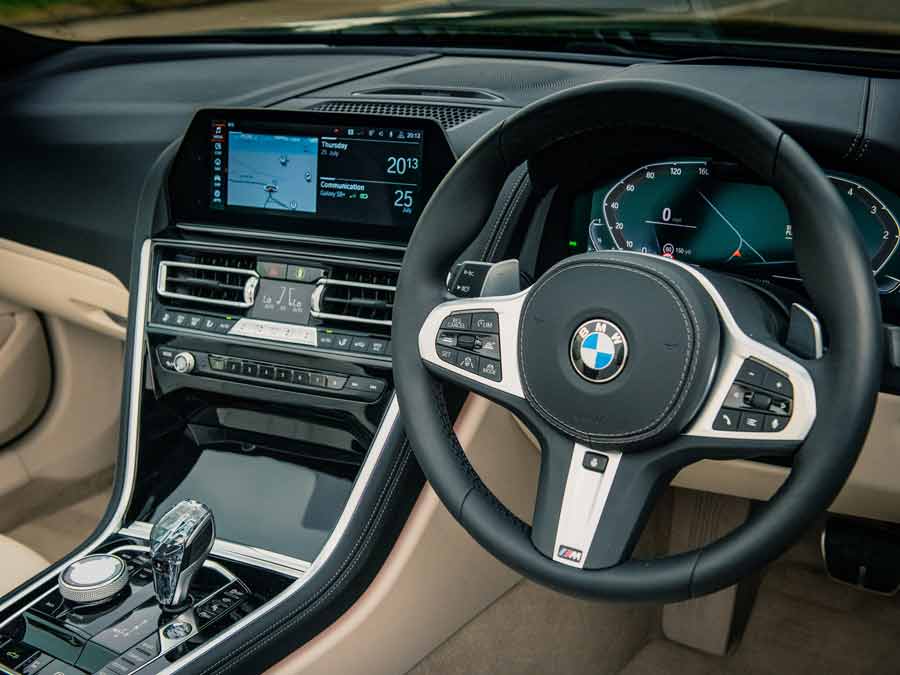 Superbly engineered, the 8 Series is a stunning car if you were looking for a supremely comfy, refined and quick car to do some serious miles in, while still producing enough drama for when you want to have a bit of fun. 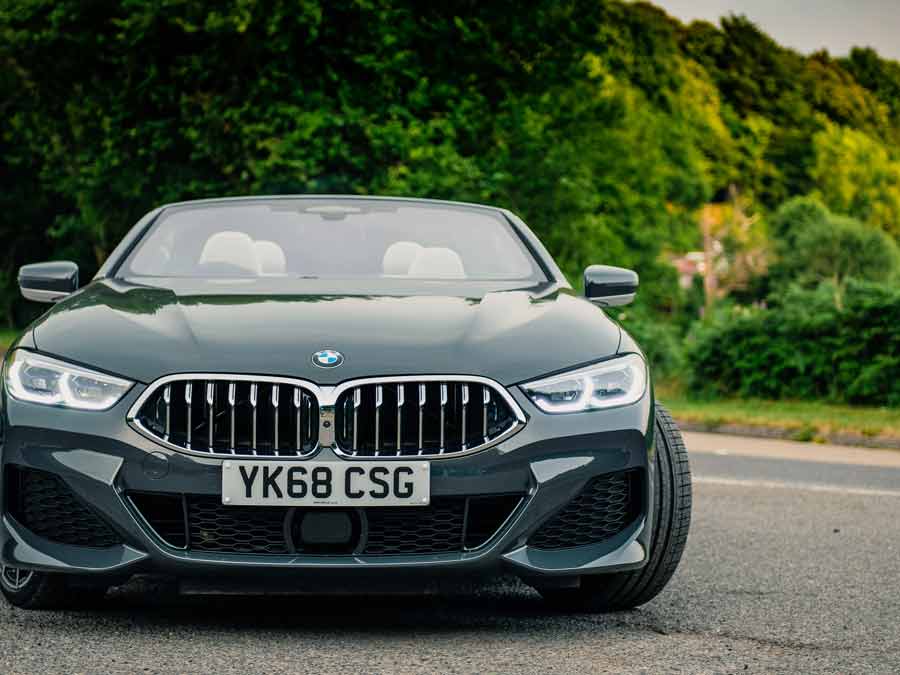