Our review of the

This new Mercedes-Benz hatchback might look conventional on the outside, but it’s striking once you step inside

It’s hard to believe that the first generation Mercedes-Benz A-Class was launched over twenty years ago now. Spurning the familiar hatchback design sported by the likes of BMW’s 1 Series in favour of mini MPV styling, but the A-Class was remarkably innovative at the time.

While the design meant there was a decent amount of space for all passengers, it was a pretty dull driving experience which wasn’t made any better by the upright driving position. We won’t even mention the infamous ‘elk test’.

With the latest fourth-generation model, things look a lot more conventional at first glance, with the new model had to tell apart from the more traditional hatchback styling of the car it replaces. But that’s only half of the story!

On the outside, the sophisticated and sleek looks of the new A-Class certainly make it much less divisive than the original model, but whether Mercedes could have been a little bit braver with the design will come down to personal taste. 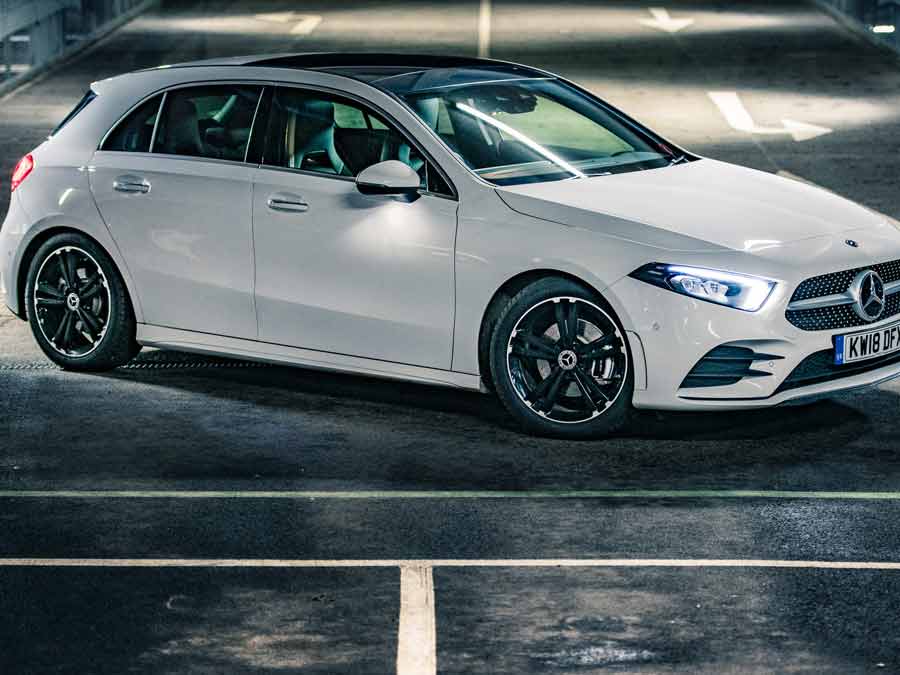 Step inside the A-Class, and you soon realise that Mercedes’ designers and engineers have concentrated all their efforts on its cabin. There’s nothing else like it that we’ve seen on any other car.

The first Mercedes to get what the company terms its MBUX infotainment system, and while you could be forgiven for expecting Mercedes to reserve its latest tech for its flagship S-Class model, it’s great to see it right here in one of its most affordable cars.

MBUX is an acronym for Mercedes Benz User Experience, which sees the A-Class ditch conventional dials in favour of a large widescreen cockpit running across the dashboard that features two displays. Base A-Class models will feature two 7-inch screens while paying a bit more and you get one 7-inch and one 10.25-inch display. Go for a top of the line model like we’ve got here and you get two large 10.25-inch screens. 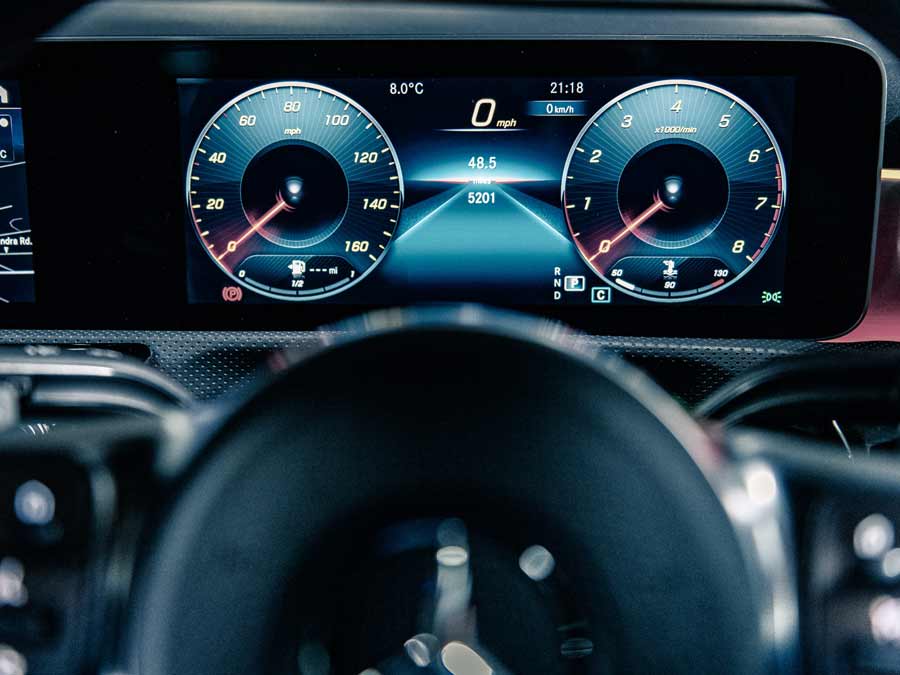 It certainly looks very slick, with the steering wheel adorned with buttons and dials to control the two displays. Alternatively, there’s also a touchpad in the central console that can also be used to interact with the A-Class, while if that isn’t enough, the primary screen is also touch-sensitive.

The quality and clarity of the cockpit are excellent, thanks in part to the 1920×720 pixel resolution of the two 10.25-inch displays. The instrument cluster has three styles to choose from, while the seating position, ambient lighting, favourite radio station and orientation of the navigation map are stored as a profile. 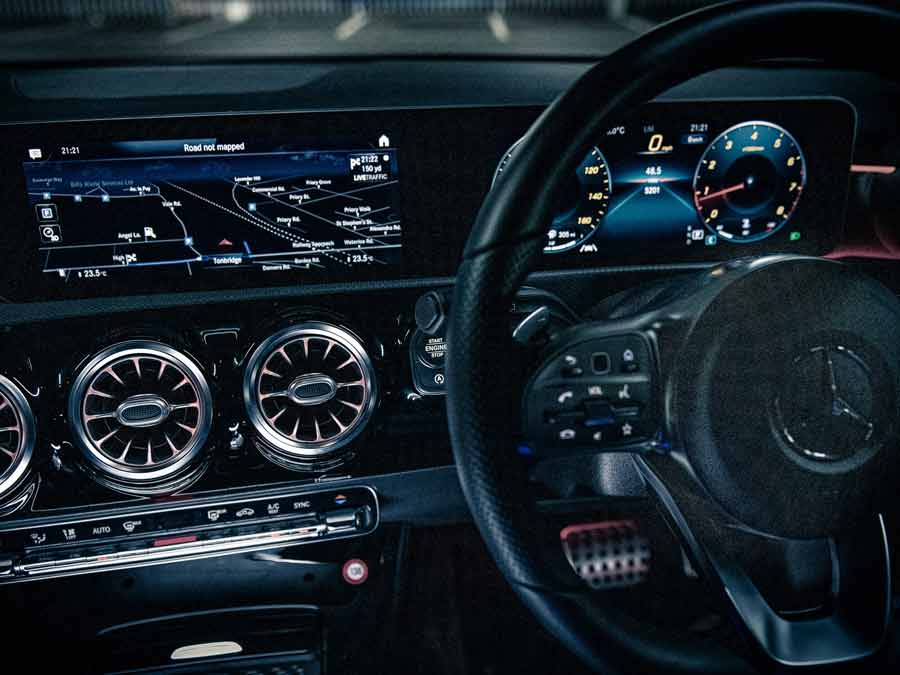 You’ll either find the way the colour of the vents changes from blue to red when you increase the cabin temperature (and vice-versa) a cute touch or a bit of a gimmick. The overall premium level of materials is slightly let down by the rather spindly and plasticky column stalks that operate the indicators and transmission. These controls feel a bit of an afterthought, at odds with the overall quality of the interior.

The A-Class is full of clever technology

Rather than demanding fixed commands such as “phone home”, the A-Class uses a natural speech recognition, known as MBUX LINGUATRONIC and is designed to obey virtually every command from the fields of infotainment and vehicle operation.

MBUX activates via a button on the steering wheel, or by voice a voice command like “Hey Mercedes…”. The system also understands commands like “when will we get there” – servicing you with an estimated time of arrival. You might find on occasion your MBUX doesn’t understand the question – but learning software, updated over-the-air throughout the car’s life should remedy this. The learning software will see the A-Class increase its vocabulary with new buzzwords or changing use of language in the future. 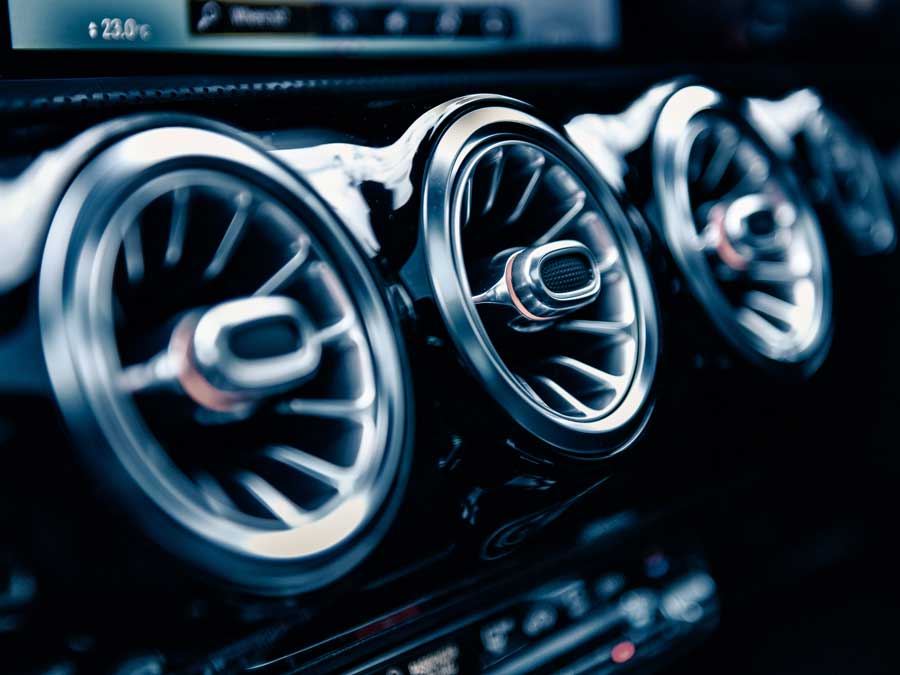 Along with its intelligent voice activation, the MBUX is also designed to anticipate what the user would like next. As an example, you might listen to Today on Radio 4 on your morning commute and then regularly change the station to listen to some music on your way home, MBUX will send this as a suggestion. Same goes for calls – if you periodically phone your mum or dad on the journey home on a Wednesday, you’ll receive their telephone number as a suggestion on display around the time you usually make the call.

There are more clever touches when it comes to the sat-nav as well (if you opt for the Advanced Navigation Package). Using a forward-facing camera, it displays the road ahead on the central infotainment screen and will highlight upcoming turns and junctions with a neat blue arrow, showing you where to go. It can be beneficial – we found it a big help when charging back cross-country in the pitch black, meaning no missed turnings.

How much space does the A-Class have?

The latest A-Class is both longer and wider than the outgoing car, meaning more legroom for passengers both in the front and back. If you need to get four adults somewhere, the A-Class will happily do it, though passenger in the rear might not experience quite the same amount of room as if they were sitting in some of its rivals. 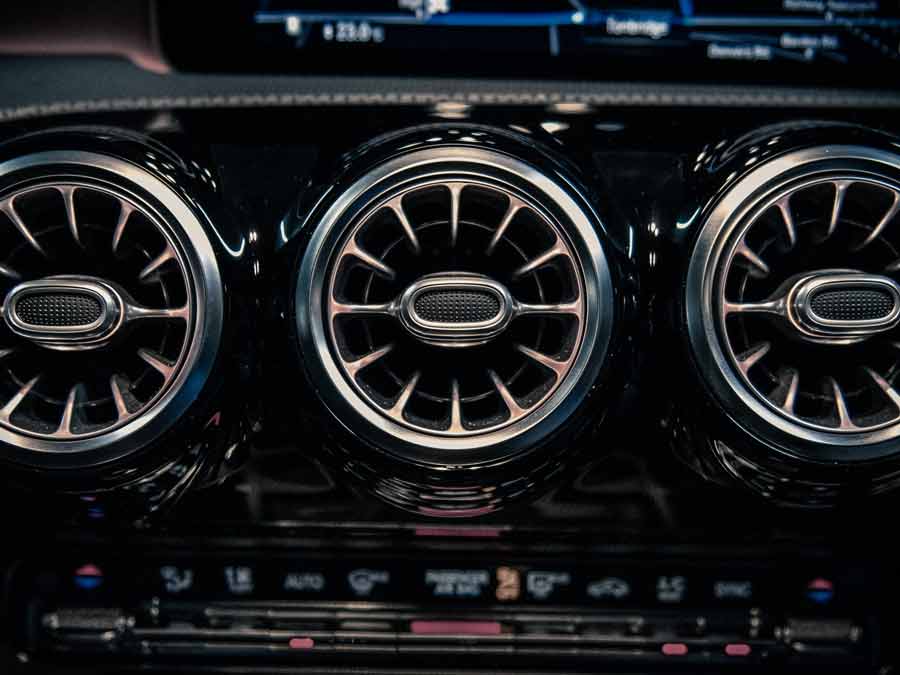 While it can’t boast class-leading boot space, the A-Class has seen the capacity increase by 29 litres to 370 litres with the rear seats in place, while dropping the seats in the back and you’ve got 1,210 litres of space to play with.

Mercedes offers the A-Class with the choice of three engines, a 1.5-litre diesel and two petrol options, a 1.3-litre and 2.0-litre. There’s no manual option either, with all models getting a 7-speed automatic transmission to keep things simple.

We drove the A200 variant, which while you might expect would be the 2.0-litre petrol, was, in fact, the smaller 1.3-petrol. This 4-cylinder turbocharged engine has a power output of 163bhp and will hit 60 mph in 8 seconds.

Steering is nice and sharp, while we found that the engine and gearbox combo worked well together. It’ll happily cruise decent distances on the motorway, while should you find a clear B-road, swapping to ‘Sport’ mode and opting to override the auto ‘box with the A-Class manual override paddles makes for an enjoyable drive.

The A-Class doesn’t disappoint inside. The sleek widescreen cockpit and array of advanced tech on offer is mightily impressive, which is complemented by a cabin that’s got a beautiful premium feel to it.

While we’d love to see an even more radical exterior design, the A-Class doesn’t disappoint inside. Mercedes-Benz has given the A-Class the sleekest of widescreen cockpits and an array of advanced tech; it’s all mightily impressive. All this tech and the premium feel, its certainly got the wow factor, and we like the A-Class a lot. 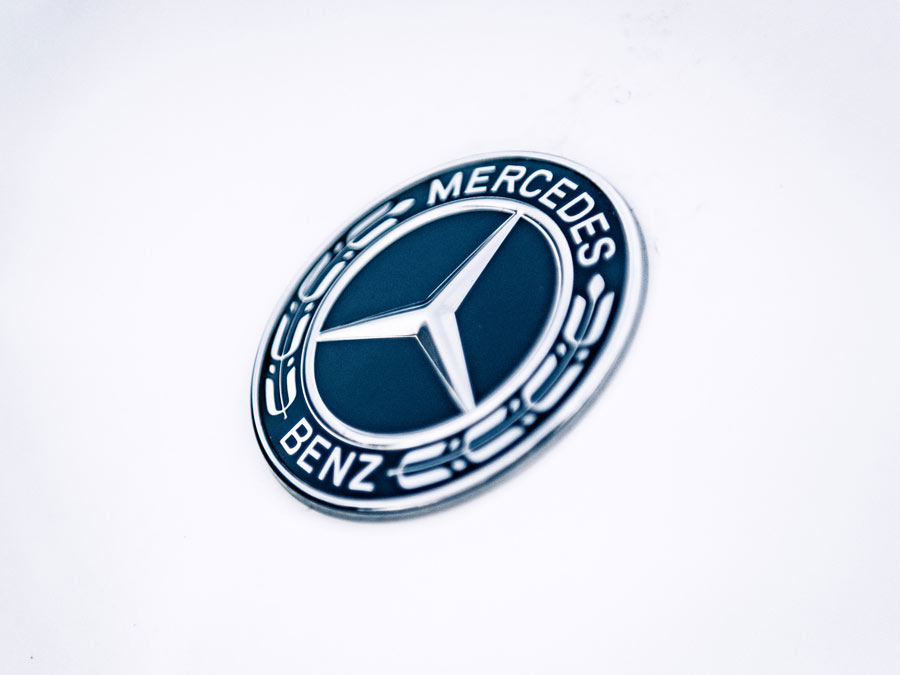